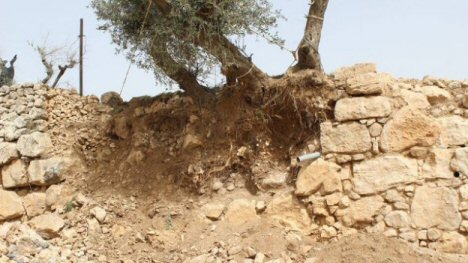 The Israeli Antiquities Authority (IAA) is conducting a dig in Hebron’s Tel Rumeida neighbourhood, a dig which is destroying the area.While financed by Israel’s Ministry of Culture and Sport, this dig was undertaken at the initiative of Israeli settlers in Hebron. The dig, the fourth in Tel Rumeida, is carried out by the IAA and the University of Ariel, located in the West Bank settlement of Ariel.

While David Wilder, spokesperson for Hebron’s settlers, claims all decisions related to the excavations are made by the IAA, the settlers already plan to establish an archaeological park on the site upon conclusion of the dig.

The Civil Administration told the Israeli newspaper Haaretz in January that “The Antiquities Authority has been carrying out rescue excavations in Tel Hebron, following the Hebron settlers’ initiative to develop an archaeological park open to the public. The administration is endeavoring as a matter of routine to protect, develop and carry out rescue digs regardless of the future of these sites and the arrangement to be carried out in the future”.

While Israel presents these as ‘rescue digs’, already in the late 1990s the IAA was involved in an excavation of Tel Rumeida, on top of which permanent housing for the Ramat Yishai outpost was constructed from 2001.

The Israeli archaeologists’ group Emek Shave reports that many of the remains discovered in this previous excavation are now located under settlers’ houses and are features of a guided tour led by the settlers.

Palestinians note that the current excavation in Tel Rumedia will likely be used in the future to connect between the settlement outposts in Hebron’s Old City.

The use of ancient sites to attract visitors and strengthen the legitimacy of settlements is known from other areas, including the City of David in East Jerusalem and Sussiya in the South Hebron Hills. Emek Shave estimates that in the case of Hebron, the combined archaeological site and view of the ancient city of Hebron and the Cave of the Patriarchs will have just such an effect, with an especially powerful emotional component.

Speaking with the AIC, Hisham Sharabati of the Hebron Defense Committee stated that Hebronites ‘will continue to protest against this project, and all rights violations perpetuated by settlers in the city’.

Photos and more at AIC.