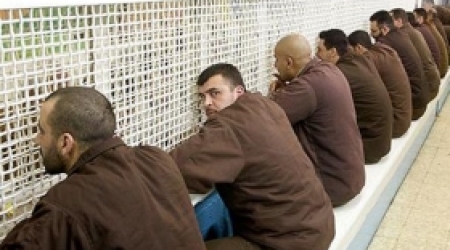 Head of Prisoners Association Tawfiq, Abu Naim, has stated that Palestinian detainees are to launch a general hunger strike in April.Abu Naim said, in a private statement to Al Ray Palestinian Media Agency, that the prisoners’ move comes as a protest against the unacceptable situation they live in, pointing out that all prisoners will participate unless there are factional instructions.

He further explained that the detainees protest the actions of Israeli Prison Services against the them, highlighted by the demands they are looking forward to achieving by the strike:

They are calling for the restoration of prisoner policies before the capture of Israeli soldier ‘Gilad Shalit’, an end to the continued harassment of prisoners, especially medical patients, and the fulfillment of demands agreed upon and brokered by Egyptian intelligence.