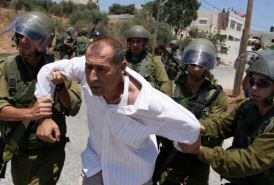 Israeli soldiers kidnapped, on Thursday at dawn, eleven Palestinians from different parts of the occupied West Bank, after breaking into their homes and searching them.Media sources said the soldiers invaded a neighborhood in Nablus city, in the northern part of the occupied West Bank, in addition to Zawata town and the Balata refugee camp, and kidnapped three Palestinians after searching and ransacking their homes.

The three have been identified as Islam Jouda from Zawata, Mohammad Reyahi from Balata, and Mahdi ‘Ashour from Nablus.

The two Palestinians, kidnapped in Hebron, have been identified as former political prisoners Qeidar Gheib, and Bassam Maswada, from the al-Joura neighborhood.

The Israeli army claimed that ten of the kidnapped Palestinians are “involved in attacks against the soldiers and settlers,’ and have all been moved to security centers for interrogation.

On Wednesday evening, soldiers illegally confiscated a truck and a tractor owned by the Local Council of Yatta town, near Hebron, and took them to the Etzion military base.

Coordinator of the Popular Committee against the Wall and Settlements in Hebron Rateb Jabour said the confiscated vehicles are used for the collection and removal of trash.