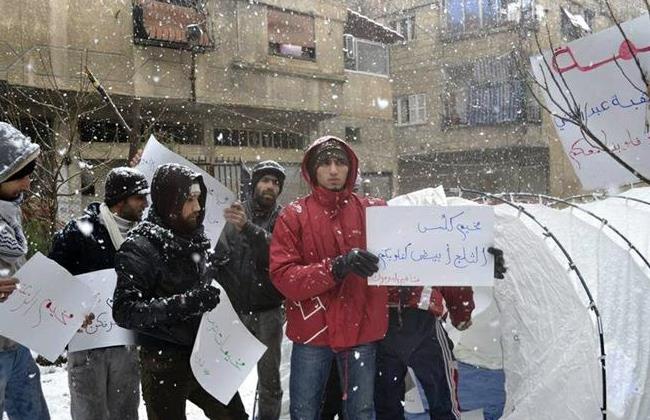 Around 18,000 Palestine refugees are trapped in Yarmouk’s refugee camp without food supplies and heating sources, according to UNRWA.The international agency UNRWA announced on Thursday that it was alarmed and concerned by the extreme deterioration in the humanitarian situation experienced by the people in Yarmouk.

Around 18,000 Palestine refugees live in Yarmouk Camp, a neighborhood south of Damascus, Syria. The refugees are trapped as the area is besieged by Syrian President Assad’s forces in one section and rebels in another.

UNRWA reports that the refugees in Yarmouk have dangerously low food supplies, no electricity, lack of heating devices, all amid a brutal snowstorm with temperatures forecast to drop near freezing overnight.

A recent upsurge in fighting between Assad’s loyalists and Syrian rebels has created a humanitarian disaster. With winter weather set to last several more months, and without access to clean water, food, health care, electricity, heating fuel, and other necessities, UNRWA says Yarmuok’s civilian population is at the brink of total catastrophe.

Over the previous two months Yarmouk has seen an upsurge in armed conflict, including the use of heavy weapons, which has continuously disrupted the distribution of life-saving humanitarian aid to the refugees.

UNRWA spokesman Chris Gunness tells IMEMC that there has been no successful distribution of humanitarian aid to Yarmouk since December 6, 2014.

Gunness said, ‘To stop the suffering of Yarmouk civilians, UNRWA calls for this level of cooperation to resume, for the immediate cessation of armed hostilities in and around Yarmouk,and for all concerned parties to act in ways that promote the protection of Yarmouk’s civilians and give the utmost attention to their humanitarian needs.’

Before the outbreak of the Syrian civil war, Yarmouk had a population of over one million Palestine refugees. Later, the camp began to depopulate as fighting closed in on the area.

It is unknown how many Palestine refugees have been killed in fighting in Syria, but some estimate as many as 25,000. The location of many refugees from Yarmouk who fled is unknown.