Al-Araqib Village Demolished For The 81 Time 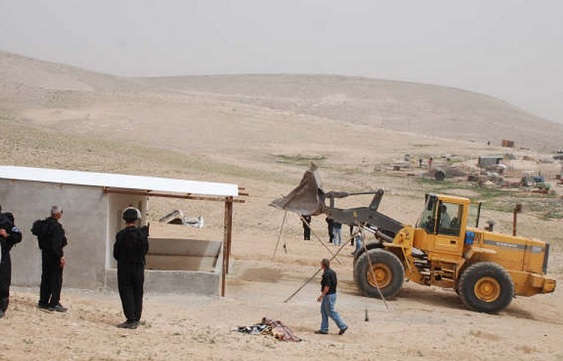 Israeli bulldozers accompanied by hundreds of police officers invaded the Negev Arab Bedouin village of al-Araqib, and demolished its structures, for the 81st time, rendering the residents homeless in the cold and the rain.The soldiers also invaded Rahat Bedouin city in the Negev, and demolished the foundation of an under-construction home, in addition to demolishing another structure in Um Ebtein village.

Arab Member of Knesset Talab Abu ‘Arar, of the Islamic Movement, said Israel proves every day that it was established to harm the Arabs and displace them.

“The Israeli government is doing the impossible, everything it can to protect Jewish Israelis, and provide them with all means of comfort and safety,” Abu ‘Arar said, “But when it comes to Arabs, they are demolishing our homes, and displacing entire families; this is a flat-out Zionist hatred, and racism against all Arabs in the country.”

It is worth mentioning that Abu ‘Arar sent a letter to the Legal Advisor of the Israeli Government, and the Interior Minister, challenging the demolition of the village, especially under the current bad weather conditions.

He stated that the latest demolition is also used to boost certain right-wing parties that seek coalitions, ahead of the upcoming general election.