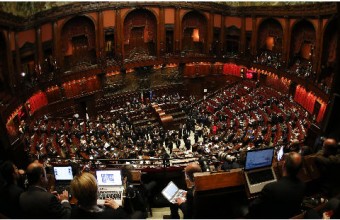 The Italian parliament has again postponed the vote on a non-binding bill calling for the official recognition of a Palestinian state, reportedly under pressure from Israel.The motion is understood to be similar to the one put forth in Sweden, where the government formally recognized a Palestinian state last year , as did France, Britain, Ireland, Portugal and Spain.

The motions in question, however, have no actual diplomatic effect and are chiefly a symbolic gesture, PNN reports.

A similar vote is planned in Belgium, where legislators are working on a resolution to recognize a Palestinian state, though the government said, last week, that any timing to proceed will depend on European Union action.

An AFP count puts the number of states which now recognize Palestine at 112.