2 Israeli Prisons Close in Lieu of Attack on Guard 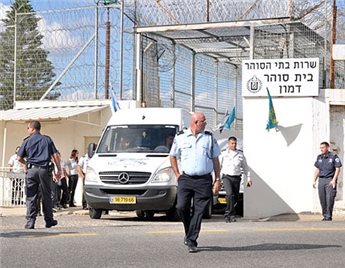 Israel Prison Service (IPS) shut down Eshel and Nafha prisons on Monday, after a Palestinian prisoner attacked an officer in Rimon prison, a prisoner’s rights group said.The Palestinian Prisoner’s Society warned that IPS would likely be carrying out retaliatory measures against Palestinian prisoners following the attack.

The group had said, earlier, according to Ma’an News Agency, that a prisoner had stabbed an Israeli officer in protest of sanctions imposed on prisoners.

See: imemc.org/article/70681 for extensive info on this topic.

Israeli Channel 7 reported that the prisoner was to be transported to receive medical treatment and that, when he was searched, he pulled out a wire and slashed at a guard’s neck and head.

The guard was treated on site, and is in ‘good condition,’ according to the report.

Around 7,000 Palestinians are currently being held in Israeli prisons, more than 2,000 of whom were arrested by Israeli forces over last summer amid heavy tensions and violence in the West Bank and Gaza.