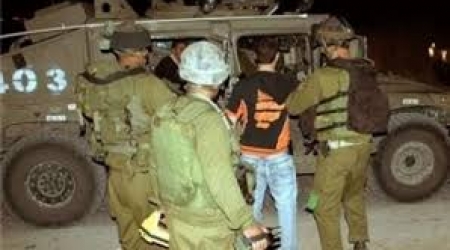 Israeli forces detained a lawyer and two children during a raid on their houses in the nearby town of Al Tur (Mount of Olives) and Al Thawri neighborhood, in the city.Coordinator for families in the Jerusalemite prisoners committee, Amajd Abu Assab, said that soldiers detained Rami Al Alami, lawyer of the Prisoners and Ex-Prisoners Affairs Committee, during a raid on his home in Al Tur.

He added that Israeli forces had also detained two children, Mohammed Busiala, age 14, and Ibrahim Ghaith, 16, after raiding their homes in Al Thawri neighborhood in Silwan; all detainees were taken to Al Maskobia prison, west of the city.

See: http://www.imemc.org/article/70655 for further info on children in Israeli prisons.

Abu Assab pointed out that all detainees will stand for trial in the Magistrate court of Jerusalem within hours, for consideration of the extension of their detention.

Israeli authorities extended, on Sunday, the detention of the follow-up committee member of Al Issawia village, Mohammed Abu Hummus, noting that he was arrested immediately after he came out of Al Aqsa Mosque.

In the same context, Israeli police released three Jerusalemite women who were also detained as they came outside Al Aqsa Mosque, barring them from visiting it for 15 days.