Palestinian Injured After Being Rammed By An Israeli Car In Hebron 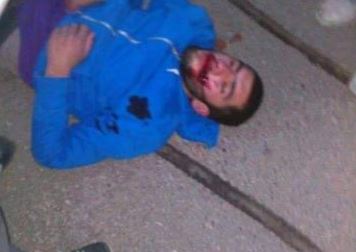 Medical sources have reported that a young Palestinian man suffered moderate wounds, on Monday evening, after being rammed by an Israeli car, belonging to a settler living in an illegal Israeli colony in Hebron, in the southern part of the occupied West Bank.The sources said Hasan Abdul-Rahman Badran, 22, from the al-Borj village, south of Hebron, was heading back home from work. The incident took place near a section of the Israeli apartheid wall, next to the village.

Eyewitnesses said the incident was a deliberate attack as the Israeli driver swerved towards the Palestinian, and fled the scene after hitting him with his car.

The wounded Palestinian was moved to the Soroka Israeli medical center in Be’er as-Sabe’ “Beersheba,’ suffering various cuts and bruises, in addition to a pelvis fracture. He was also bleeding from his mouth.

Also on Monday evening, Israeli sources said an Israeli man was stabbed in occupied Jerusalem, and that the incident carried a criminal motive.

On Sunday, an Israeli man suffered a moderate injury, allegedly after being stabbed by a Palestinian, in Jerusalem; the army arrested the man and took him to an interrogation facility.