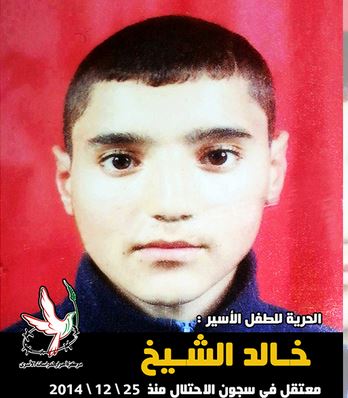 Child detainee, Khaled Husam Sheikh, 15 years of age, has been denied family visits, and essential medical treatment, since his abduction by the Israeli army 62 days ago, after the soldiers alleged he threw stones on their vehicles. The Ahrar Center for Detainees’ Studies and Human Rights said the child suffers from anemia, and other health issues, adding that the army is not providing him any adequate, or specialized, medical treatment since kidnapping him on December 25, 2014.

His family said it was never allowed to visit him, and filed several applications to the Israeli side, but the army kept denying their right to see him.

The family called for more solidarity activities with all detained Palestinians, especially the children, and urged human rights groups to intervene and secure the release of their son.

Ahrar Center said denying the detained child the right to medical attention, and treatment, is a serious violation of all human rights agreements, and International Law.

Sheikh, from Beit ‘Anan in occupied Jerusalem, was kidnapped by the soldiers next to his family home, and is currently held in the ‘Ofer Israeli prison, near the central West Bank city of Ramallah.

On Wednesday, February 11, his family said a court hearing, to look into the case of their child, has been scheduled to February 25.

Head of the Ahrar Center, Fuad al-Khoffash, said Israel is currently holding captive nearly 300 children, under very difficult conditions, and is denying them their basic rights.

Al-Khoffash called for the release of all detained children, and warned that international silence regarding the ongoing and escalating violations is encouraging Israel to continue its serious violations of all international law, treaties and regulations.