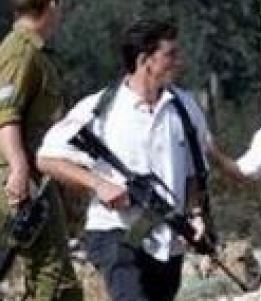 A number of armed Israeli extremists opened fire, on Wednesday at dawn, targeting a number of Palestinian homes in Nahhalin village, west of the West Bank city of Bethlehem, causing damage but no injuries. Soldiers fire gas bombs on schoolchildren in Jerusalem.Local sources said extremists from Beitar Illit illegal colony, drove their motorcycles on a bypass road that was recently paved as part of an electricity network for the colony, and fired dozens of rounds of live ammunition.

The attack targeted homes in the Schools Street, and the al-‘Ein neighborhood; no injuries were reported.

Residents from Nahhalin said Israeli fanatics recently escalated their attacks against them, and their property, and uprooted farmlands in addition to flooding the lands with wastewater, and throwing stones on Palestinian cars.

In addition, soldiers fired several gas bombs on Palestinian schoolchildren in the at-Tour town, overlooking the Old City of Jerusalem, causing scores of children to suffer the effects of tear gas inhalation.