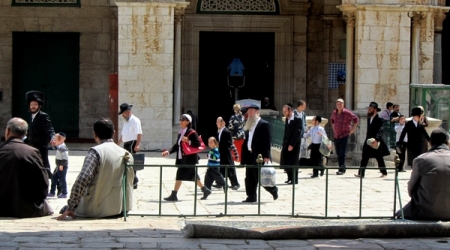 Extremist Israeli settlers again stormed the courtyards of Al Aqsa Mosque on Thursday morning, from the Mughrabi Gate, under tight security protection from Israeli police.Media coordinator at the Islamic Waqf in Jerusalem, Firas al-Debes, said that about 16 Israeli settlers stormed the mosque in the morning and organized a tour in different parts of its courtyards, according to Al Ray.

He explained that Palestinian worshippers confronted the settlers and chanted ‘Allahu Akhbar (God is Greatest)’.

Al-Debes noted that Israeli police stationed at the gates confiscated the identity cards of Palestinian women as they attempted to enter the holy site.

It is also noteworthy that the Israeli Magistrate Court decided, on Wednesday, to deport four women from the mosque for a period ranging between 10 to 60 days.

Extremist Israeli settlers and politicians have been violating the sanctity of Al Aqsa Mosque on an almost daily basis, and always under the protection of armed occupation forces, who often attack Palestinian worshipers trying to protect their holy site.