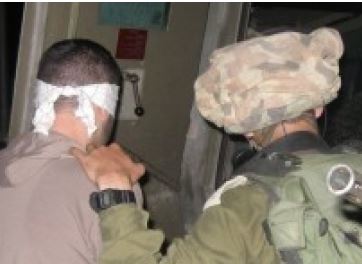 Israeli soldiers kidnapped, on Thursday evening, a young Palestinian laborer, near the junction of Gush Etzion military base and settlement block, south of the West Bank city of Bethlehem.Mohammad Mheisin, Coordinator of the Popular Committee against the Wall and Settlements in the southern part of the West Bank, witnessed the incident and said the soldiers stopped the Palestinian, search him and his truck that he uses for work, and kidnapped him “after locating a sharp object.”

The object he was carrying in his truck is a type a heavy-duty industrial scissors, he uses for work.

Mheisin added that the soldiers assaulted the young worker, while some of them tried to shoot him, but Palestinians who were at the scene prevented them from doing so.

The soldiers then kidnapped Palestinian worker, who suffered various cuts and bruises, and was moved into the Gush Etzion military base for “interrogation.”