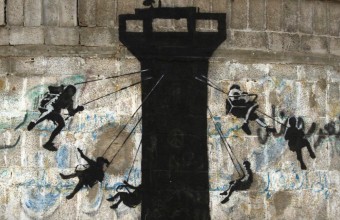 British street-artist Banksy has posted, on his YouTube channel and website, a video with images from his last trip to the Gaza Strip, where he painted four new graffiti pieces.According to the PNN, the English artist has taken his politically charged message to the bombed-out neighbourhoods of Gaza, where a series of murals, amid a backdrop of devastation, attempts to give voice to the desperation felt by Palestinians.

The video, which wants to show the situation in the Gaza Strip after the Israeli assault of July, 2014, which killed more than two thousand people, mostly civilians, begins with an ironic invitation to the viewer to ‘discover a new destination, in a unique setting guarded by friendly neighbours’.

Banksy first published the graffiti on the morning of February 25, on his Instagram account, without revealing the geographical position, which was only added later. The mural was inspired by the work of sculptor Auguste Rodin, The Thinker, and it is titled Bomb Damage. In Banksy’s version, the viewer is struck with the realization that the only possible thing on the mind of the subject is the utter devastation that literally surrounds him.

Another piece is done in the artist’s trademark black, stenciled imagery. It shows the silhouettes of children riding an amusement park swing that is circling around one of the looming guard stations which punctuate the length of the Israeli apartheid wall, which, upon completion, will be approximately 700 kilometers (430 miles).

The video shows three other graffiti pieces, including that of a cat on the rubble of houses in Gaza. Along with the photo published on his website, Banksy has released two comments:

“Gaza is often described as ‘the world’s largest open air prison’ because no one is allowed to enter or leave. But that seems a bit unfair to prisons – they don’t have their electricity and drinking water cut off randomly almost everyday,”

“A local man came up and said ‘Please – what does this mean?’ I explained I wanted to highlight the destruction in Gaza by posting photos on my website – but on the internet people only look at pictures of kittens”.