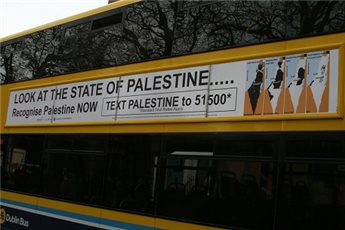 A Palestinian solidarity group in Ireland has launched a billboard campaign, Wednesday, to urge the Irish government to support the recognition of Palestine.Solidarity organization ‘Sadaka’ said that former Irish foreign minister Micheál Martin, Sinn Féin leader Gerry Adams, and PA ambassador to Ireland, Ahmed Abdelrazek, urged the Irish government to recognize a Palestinian state based on the two state parameters, as part of the campaign.

John Douglas, President of the Irish Congress of Trade Unions, said: ‘The Dáil and Seanad have given the government a clear mandate to recognize the state of Palestine… Ireland’s stated policy is that it supports a two state solution in Palestine and Israel. Ireland already recognizes Israel – we should now recognize the State of Palestine.’

Chair of Sadaka, Marie Crawley, said recognition of Palestine would put pressure on Israel to contribute constructively to the peace process.

‘Israel, as an occupying power, continues to hold a veto over Palestinian statehood. No country should deny another nation its right to statehood. And, as the maps on these billboards powerfully demonstrate, time is running out for the establishment of a Palestinian state.’

The adverts will appear on billboards, buses, bus shelters and train stations in Dublin.

In December of 2014, Irish lawmakers urged their government to recognize Palestine, in a symbolic motion that sailed through parliament unopposed.

The non-binding motion, agreed by lawmakers in Dublin, called on the government to ‘officially recognize the State of Palestine, on the basis of the 1967 borders with East Jerusalem as the capital, as established in UN resolutions.’