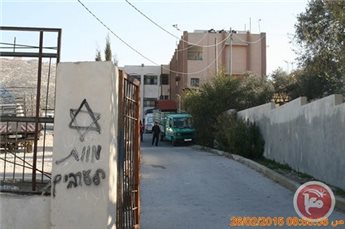 Israeli settlers, on Thursday, spray-painted racist graffiti on the walls of a Palestinian school in the village of Urif, south of Nablus, according to a Palestinian official.Ghassan Daghlas, who monitors settlement activity in the northern occupied West Bank, told Ma’an News Agency that a group of settlers from the illegal Yizhar settlement sprayed anti-Palestinian graffiti on the school.

‘Death to Arabs’ was also written on the walls.

The perpetrators were allegedly affiliated to the Hilltop Youth, a group of notoriously hardline Israeli nationalists who often live in illegal outposts within the West Bank.

The group has been known to target Palestinians and their property in so-called ‘price-tag’ attacks.

Daghlas accused the Israeli government of ‘giving free rein to extremist settlers to carry out attacks against Palestinians in an attempt to win settler votes in the upcoming Knesset elections.’

There were at least 329 incidents of settler violence against Palestinians in the occupied West Bank in 2014, according to the UN Office for the Coordination of Humanitarian Affairs.