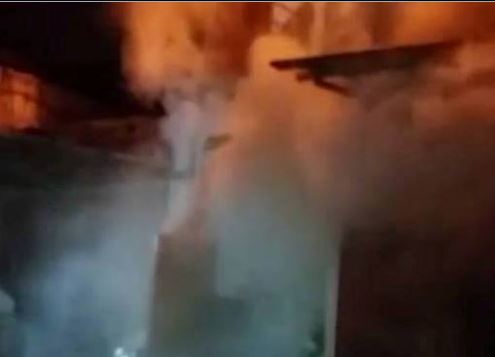 A group of Israeli fanatics burnt, on Thursday at dawn, a section of the Church of the Dormition, in occupied Jerusalem, causing significant damage, and wrote racist anti-Christian graffiti.The fanatics burnt a study room belonging to the Church, a bathing room, and toilet rooms, used by priests, and students of Christian Studies.

Member of the Fateh Revolutionary Council, secretary-general of the National Christian Assembly in the Holy Land, Dimitri Diliani, said the attack is just the latest of an ongoing cycle of violations targeting Islamic and Christian holy sites in occupied Palestine.

“Netanyahu and his government are liable for every attack carried out against Islamic and Christian holy sites,” Diliani said, “Those terrorist attacks are carried out by fanatics who receive political, financial and security support from the colonialist, extremist, Israeli government.”

He added that the Palestinians, Muslims and Christians, will never surrender to this brutal and immoral occupation, and that such attack “just expose the true terrorist, fascist, nature of Israel’s right wing and its government.”

The official demanded all churches to sue Israel in the International Criminal Court to hold Tel Aviv Accountable for its ongoing crimes, and to call for international protection to the Palestinian people, their lands and holy sites, until establishing an independent Palestinian State.

On his part, Hanna Issa, secretary-general of the Islamic-Christian Committee in Support of Jerusalem and the Holy Sites, denounced the attacks, and described it as part of ongoing crimes against Islamic and Christian holy sites.

“This is terrorism, and savagery, are carried out with the blessing of the fanatic Israeli government; this attack is just one example of numerous violations in occupied Palestine,” Issa said, “Israel aims at voiding the Arab, Palestinian, identity in the holy land, and is acting on destroying the deeply rooted Arab, Islamic and Christians, history of Palestine.

Issa, who is also an International Law expert, said burning and attacking holy sites violates Section 53 of the First Geneva Protocol of 1977, which outlaws all attacks against holy sites around the word.

He called on the international communities to act and put an end to the Israeli violations against the Palestinians, their homes and lands, and their holy sites in every part of occupied Palestine, and to ensure holding Israel accountable for its crimes, and its ongoing illegal occupation.

It is worth mentioning that on May 31, 2013, Israeli fanatics spray-pained “Jesus is a monkey,” and other racist graffiti, on the walls of the Church of the Dormition. They also wrote “Havat Maon,” which refers to an illegal settlement outpost that was dismantled by the army a few days earlier.

A similar attack against the church was carried out on October 3 2012, while on May 23 2014, the Israeli fanatics wrote “Death to Christianity,” “Jesus is dead,” and “Mary is a prostitute,” on the walls of the Jerusalem Baptist Narkis Congregation Church.

Numerous attacks, that included burning mosques and writing anti-Islamic graffiti, have also been carried out against Islamic sites in different parts of occupied Palestine. The fanatics also burnt and tore copies of the holy Quran.