Five Palestinians Kidnapped Near Ramallah, One Near Jenin 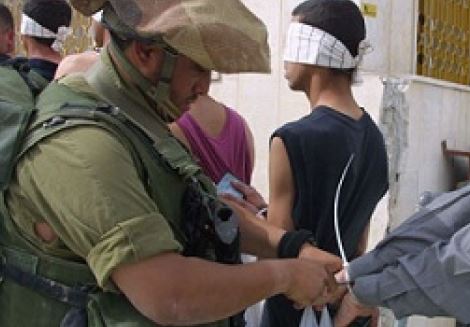 Israeli soldiers kidnapped, on Thursday at dawn, five Palestinians near the northern West Bank city of Jenin, and one near the central West Bank city of Ramallah, after the soldiers stormed several homes, and searched them.Media sources in Jenin said several military vehicles invaded the al-Yamoun town, west of Jenin, kidnapped one Palestinian, and hand another a military order for interrogation.

The sources said dozens of soldiers stormed the home of Talal Ahmad Abu Toul, and kidnapped him after violently searching the property, causing excessive damage.

The soldiers also stormed the home of former political prisoner Nour ‘Adnan al-Ja’bari to handed him a military order for interrogation at the Salem military base, but he was not home, so the soldiers handed the order to his mother.

They also invaded the homes of Kamel ‘Ezzat al-Ja’bary, and his son, and ransacked their properties causing ‘Ezzat to suffer a panic attack, and other complications, before the family moved him to Khalil Suleiman Hospital.

In addition, several soldiers invaded the al-Aqsa Bakery in al-Yamoun near Jenin, and searched it before storming several nearby homes, and briefly held and interrogated several Palestinians.

In the central West Bank district of Ramallah, soldiers invaded Deir Abu Mashal village, west of the city, and kidnapped five Palestinians after searching their homes.

It is worth mentioning that the soldiers installed roadblocks, over the last few days, blocking the main entrance of the village, allegedly after local youths hurled stones on Israeli cars and army vehicles, driving on the nearby settler-only road.

The soldiers also invaded Sheikh Jarrah neighborhood in Jerusalem, and stormed a building, in addition to breaking into a home in Ras al-‘Amoud neighborhood.