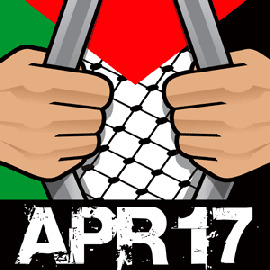 Head of the Palestinian Detainees Committee Issa Qaraqe’ said Monday that the detainees, held in different Israeli prisons, detention camps and interrogation centers, are heading towards escalated protest measures that include total disobedience, and hunger strikes.In a press release, Qaraqe’ said the detainees sent a letter stating that they intend to start their protests on March 10th, by refraining to stand in line for counting, removing electric equipment from their rooms, refraining from leaving their rooms, and gradually start returning their meals, in addition to chanting and banging on the doors, and bars.

“The planned protests would gradually escalate until April 17, the Palestinian Prisoners Day, when they intend to declare a comprehensive hunger strike in all prisons and detention centers, they are even threatening to burn their mattresses and covers” the official said, “They are demanding Israel to recognize their legitimate rights, including proper medical treatment, removing the isolated detainees from their cells, a complete halt on collective, and individual, punishment, an end to Administrative Detention, and many other basic rights.”

Qaraqe’ also stated that the conditions in Israel’s prisons are disastrous, and that the detainees will not tolerate the escalating violations and abuse any more.

“The issue here is not only about the daily harassment, this is a calculated and planned abuse, violations meant to break their spirits and steadfastness,” the official said, “The detainees are facing slow death; their lives are in real, serious, danger; they need our support and solidarity.”

In addition, the recently released physically-challenged detainee ‘Adnan Moshsin, who spent eight months in Administrative Detention without charges or trial, delivered a message from 17 ailing detainees, half of them paralyzed and held in the Ramla Prison Clinic.

In their message, the detainees complained of very difficult, inhumane, conditions they face, and their urgent need for adequate and professional medical attention.

In related news, head of the Palestinian Prisoners Society (PPS) Qaddoura Fares warned, Monday, that Israel is using the high fines it imposes on the detainees as a means to fund its prisons, and called on the detainees and their families to refrain from paying the fines and bail amounts.

Fares said lawyers who adhere to the Israeli demands are effectively violating a national consensus, and “are legally accepting the Israeli stance that, by resisting the occupation, the detainees committed a crime or did something wrong that requires them to pay fines.”

He said some lawyers have been exposed after conducting suspicious deals that led to high fines and excessive bail amounts on detainees in exchange for their release, and added that “through legal measures, the PPS managed to obtain rulings from Israeli courts outlawing additional imprisonment for detainees who don’t pay fines.