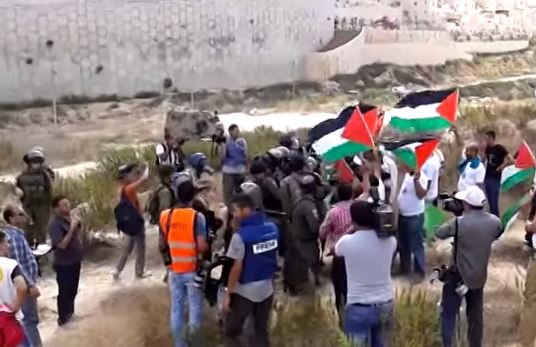 Dozens of nonviolent resistance activists gathered, on Monday morning, in Khallet an-Nahla area, southeast of Bethlehem, and marched while raising Palestinian flags to affirm their steadfastness in their own lands amidst Israel’s illegal confiscation of their lands, to build illegal colonies.Mohammad Mheisin, coordinator of the Popular Resistance Committee, said the protesters marched in the area carrying Palestinian flags, and posters containing names of villages Israel destroyed in 1948, and expressed their rejection to Israel’s ongoing violations of International Law.

Mheisin said Israel is now trying to build Givat Eitam colony on 1700 Dunams (420.07 Acres) of Palestinian lands in the area, adding that Tel Aviv initially approved the plan in 2004.

The official warned that this plan would block geographical contiguity in the area, and would also lead to further isolation of Palestinian orchards.

He added that Israel’s colonialist activities are meant to destroy any chances of a two-state solution, but the Palestinians will continue their popular resistance until liberation and independence.