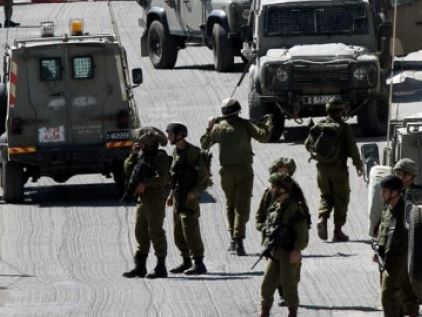 Israeli soldiers kidnapped, on Monday at dawn, three Palestinians in Nablus, Ramallah, and Bethlehem, and stormed many homes, especially in the southern West Bank district of Hebron. Soldiers flood agricultural lands with wastewater near Bethlehem.Media sources in Nablus, in the northern part of the occupied West Bank, said several armored Israeli military vehicles invaded Aseera ash-Shemaliyya town, stormed and searched a number of homes, and kidnapped one Palestinian identified as Ahmad Mofeed ash-Showly, 28 years of age.

In addition, soldiers invaded a home of Betunia town, west of the central West Bank city of Ramallah, and kidnapped Mohammad Hashayka, 22, after storming and searching his home.

The Ramallah office of the Palestinian Prisoners Society (PPS) said the soldiers cuffed and blindfolded the kidnapped Palestinian, and took him to the nearby ‘Ofer prison and military base.

His brother told the PPS that the soldiers stormed the property around 4 at dawn, ransacked the place while searching it, and kidnapped his brother, who is in his fourth year in Birzeit University, studying Finance.

He is a former political prisoner who, in 2011, spent eight months held under arbitrary administrative detention without charges or trial.

Soldiers also invaded the al-Jabal area in Bethlehem, and kidnapped Jamal Khaled al-Hreimi, 22, after violently searching his home, and stormed a number of neighborhoods throughout the city, in addition to Beit Jala city and nearby communities.

Also in Bethlehem, soldiers closed the main road in the al-Baq’a area, at the western entrance of Teqoua’ town, east of Bethlehem, and opened sewage pipes, flooding dozens of Palestinian olive trees.

Head of the Teqoua’ Local Council, Taiseer Abu Mfarreh, told the Radio Bethlehem 2000 that the soldiers, including some in civilian clothes, conducted training in the area, causing panic attacks among several residents, especially the children.

In addition, soldiers invaded various neighborhoods in the southern West Bank city of Hebron, a number of nearby towns, installed several roadblocks before stopping and searching dozens of cars, and investigated the ID cards of the passengers while questioning them.

Besides Hebron city, the invasion mainly targeted Bani Neim, Halhoul and Sa’ir towns, and the northern entrance of Jouret Bahlas area in Hebron.

Related:
Over 280 Palestinians Kidnapped by Israeli Forces in February http://www.imemc.org/article/70758