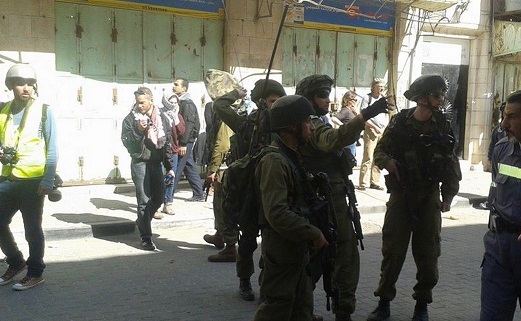 Israeli soldiers prevented, Tuesday, a group of 60 journalists, members of the Central Bureau of Journalists, and other media organizations, from entering the Ibrahimi Mosque, in the southern West Bank city of Hebron.The soldiers told the journalists that they needed to remove all of their Palestinian kufiyas (traditional patterned Palestinian scarves), but they refused and held a protest in front of the mosque while chanting slogans against the illegal Israeli occupation, its immoral restrictions on freedom of religion, and freedom of expression.

The journalists visited various media groups in Hebron, and toured in its Old City, severely impacted by Israel’s illegal restrictions and closures.

The Palestinian Journalists Syndicate strongly denounced the Israeli violations, and called on the European and International Journalists unions to intervene, and exert pressure on Israel to end its violations, and to void its illegal restrictions on journalists in different parts of occupied Palestine.

The Syndicate called on European Unions to act beyond statements of condemnation, and to file lawsuits against Israeli officials and lawmakers.

It is worth mentioning that the visiting journalists held separate meetings with Hebron Governor Kamel Hmeid, and the head of the Hebron Chamber of Commerce Mohammad Ghazi Harbawi, and discussed the impacts of Israel’s ongoing violations and restrictions on the Palestinians, and their economy.