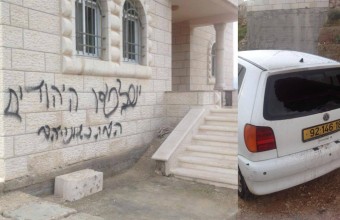 Residents of Al-Mugheer village, east of Ramallah city, today, said that Israeli settlers torched two cars and sprayed hate slogans on walls, calling for the death of Palestinians.According to PNN sources, Israeli settlers broke into the village by dawn, burned the cars of Jamal abu Alia and Akram Na’asan, as part of a campaign called ‘Pay the Price’.

Israeli sources claimed that civil administration officers arrived in the village to open an investigation into the matter.

Na’asan said that he filed more than 70 complaints against the settlers last year, but the complaints were closed after the perpetrators coiuld not be found.

‘They want to take over our land, so they attack us all the time. They killed our horses, torched tractors and plow,’ Na’asan said.

Settlers from the same group have attacked the village several times. Back in November, they burned Al-Mugheer mosque overnight, including furniture and copies of the Qur’an, and other property.

Search IMEMC: ‘Holy Sites’ for further citing of such incidents.