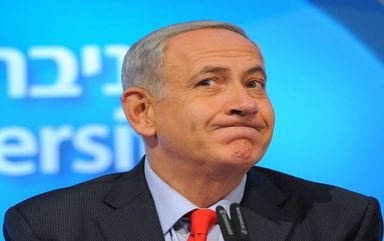 Israeli daily Haaretz has reported that the election headquarters of the Likud Party of Benjamin Netanyahu removed on Thursday at night a video ad that compared workers of the Israel’s Ports and Broadcasting Authority to Hamas fighters.The video was initially meant to show how the strict security measures, taken by Netanyahu and his government, are “keeping Israel safe.”

Haaretz said the video shows an employee of the Israeli Broadcasting Authority complaining “she became unable to get paid by the naive public after the TV tax was voided.”

It also shows an executive of a cellular company complained about “communication reforms that blocked his ability to overcharge the public,” in addition to a “tea distributor in Israel’s ports complaining the reforms “made him incapable of earning a huge salary, without doing any work.”

The video ad then ends with a Hamas fighter complaining that Netanyahu’s policies and extensive security measures “also put him out of business.”

The Likud defended its video by claiming it “was presented with a twist of humor” as Israel marks the Purim holiday, and that the video was meant to show what it called “the achievements of the Netanyahu-led coalition government.”

The Likud said it never intended to compare any person, or employee, with the Hamas movement, and did not intend to mock or insult the workers.

Haaretz quoted the head of the Israeli Organization of Trade Unions (Histadrut), Avi Nissenkorn, stating that the Likud video crossed a red line for what he called “comparing workers to terrorists.”

In his Thursday night statement, Nissenkorn demanded the Likud and its leadership to apologize to the public “for the shameful statement made in this video.”

Last Month, the Likud Party issued a video, as part of his campaign ads, showing a scenario in which a victory of leftists in Israel is a triumph for the so-called ‘Islamic State of Iraq and Syria’ (ISIS), known by their Arabic acronym Da’esh. http://www.imemc.org/article/70607