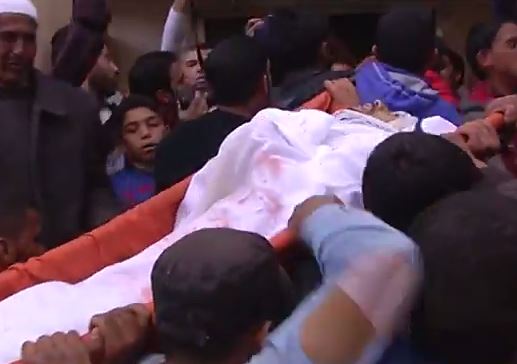 Palestinian medical sources have reported that a fisher who was shot and injured by Israeli navy fire, earlier Saturday, died of his wounds in the Shifa Medical Center, in Gaza, a few hours after his injury.The fisher, Tawfiq Abu Ryala, 34, was shot in the abdomen when Israeli naval ships opened fire on fishing boats in Palestinian territorial waters, less than six nautical miles off the coast.

The soldiers also forced two fishers, Jihad, 22, and his brother Wahid Sayyed Kaskin, 23 years of age, to swim towards their ship, and kidnapped them.

The attack is part of frequent Israeli violations against the fishers, and their boats, in direct violation of all ceasefire agreements, and the Oslo accords.

Hundreds of residents marched in the funeral procession and ceremony of the slain Palestinian while chanting slogans against the Israeli occupation, its escalating violations and assaults.

On Thursday morning, the navy, shot and wounded two fishermen in Palestinian waters near the Sudaniyya area, northwest of Gaza City, and kidnapped four others.

Two more attacks were reported on Tuesday and Monday of this week. All took place while the boats were in Palestinian territorial waters, within the six allotted nautical miles.