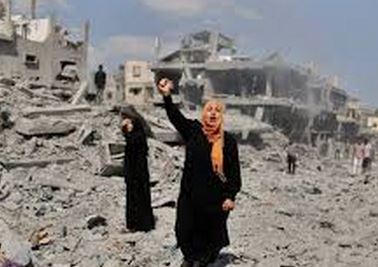 Palestinian medical sources have reported that a resident was injured, on Saturday evening, when an explosive object dropped by the Israeli military during a previous invasion, detonated near him.Spokesperson of the Ministry of Health in Gaza, Dr. Ashraf al-Qedra, stated that Sadeq al-‘Aasy, 34 years of age was injured in several parts of his body, and lost one of his fingers.

There have been numerous similar incidents that took place in different parts of the besieged and devastated Gaza Strip, especially since the promised reconstruction of homes, and buildings, remains obstructed due to Israel’s siege and its policies.

According to UN Human Rights Committee, some 2,256 Palestinians were killed during the July-August aggression, of whom 1,563 were civilians, including 538 children.

The report said that unexploded ordnance still litters Gaza, causing further casualties, he said, with an estimated 7,000 devices needing to be defused. Some 100,000 people remain displaced while 450,000 are disconnected from water mains. http://www.imemc.org/article/70795

Also on Saturday, a fisher from Gaza was killed, and two were kidnapped, were Israeli navy ships opened fire on Palestinian fishing boats in Gaza waters. http://www.imemc.org/article/70831