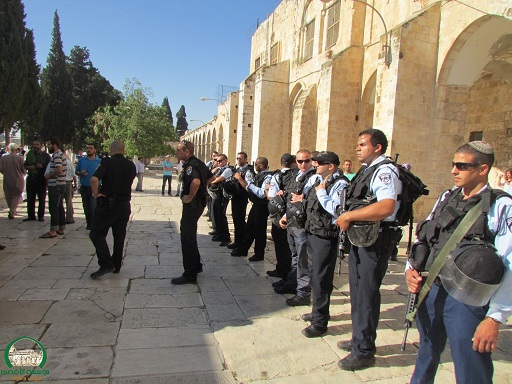 Palestinian medical sources have reported that an elderly man was injured, on Saturday evening, after a number of Israeli extremists assaulted him as he was leaving the Al-Aqsa Mosque, in occupied Jerusalem.The sources said the man, Ahmad Mahmoud al-Qaq, 64 years of age, suffered various cuts and bruises, including under his right eye.

Eyewitnesses said the man was leaving the mosque after performing evening prayers when a number of Israeli extremists approached him, and started beating him, before local worshipers saw the attack and intervened.

In related news, a number of Israelis from the illegal colony of Beit Eyin, built on Palestinian lands near Beit Ummar, north of the southern West Bank city of Hebron, attacked on Saturday afternoon, a farmer and his children while working on their land.

Mohammad Abdul-Hamid Sleibi and his children were in their own land, near the illegal colony, in the Abu ar-Reesh area.

Mohammad ‘Ayyad ‘Awad, spokesperson of the Popular Committee against the Wall and Settlements in Beit Ummar, said five masked settlers hurled stones, using slings, at the farmer and his family, forcing them out of their land.

‘Awad said Sleibi recently managed to obtain an Israeli court ruling allowing him to build a wall around his land due to ongoing attacks.