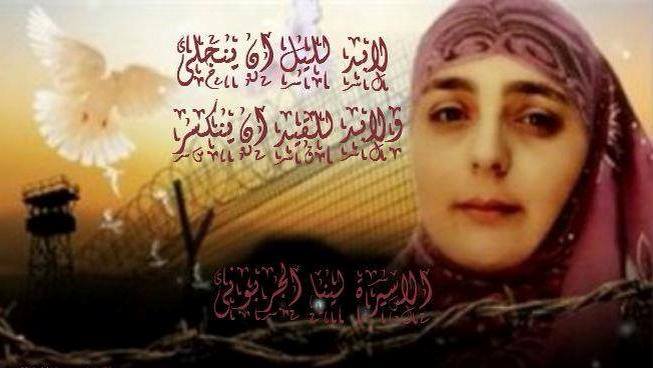 She was kidnapped by the army on April 18, 2002, and was sentenced to 17 years for “aiding Palestinian fighters.”

The Detainees’ Committee saluted the Palestinian women for their important role, struggle and sacrifices in the national struggle of their people, seeking liberation from the illegal Israeli occupation of Palestine.

“Israel has kidnapped nearly 15,000 Palestinian women since 1967, 1200 since the Al-Aqsa Intifada started in the year 2000” The Committee said, “They are mothers, wives, and children; they face torture, humiliation and abuse by the soldiers during their arrests, and by the interrogators.”

The Head of the Census Department of the Palestinian Committee of Detainees, and a member of its follow-up committee in the Gaza Strip, Abdul-Nasser Ferwana said Palestinian women present a significant honorable role in the Palestinian struggle, as they are remarkable mothers, teachers, workers, protectors, political and revolutionary symbols, artists and media figures.

“They are leaders, steadfast detainees, patient liberators who spent months and years behind bars,” he said, “They have been tortured and imprisoned just like Palestinian men are; subject to the same physical and psychological torture, held in cells that are not fit for human use.”

The official also stated that the youngest female detainee is Dima Sawahra, 16, from Jabal al-Mokabber in occupied Jerusalem, a school student who was kidnapped on March 1, 2014, and was sentenced to 18 months.

The Detainees’ Committee said seven of the detained women have husbands, and brothers, who are also imprisoned by Israel. They have been identified as:

1. Samara Zeineddin, from Majdal Bani Fadel village; her husband Nader, and her three brothers, Nazeeh, Ahmad and Abdul-Rahman are also held by Israel.

3. Tahrir Mansour, from kafr Qalil near Nablus; her brother Saddam.

7. Donya Wakid from Tulkarem; her brother Jamal, and her fiancé Mohammad Waked.

The Detainees’ Committee said the Israeli Prison Administration does not allow the detained women to visit with their imprisoned husbands and siblings, as part of ongoing Israeli violations of their rights.

The detained women complain of very bad treatment, especially during their transfer to courts, as they are frequently beaten and humiliated, while many point out the lack of proper medical treatment in addition to being confined with Israeli women who are being held on criminal charges, who repeatedly assault them.