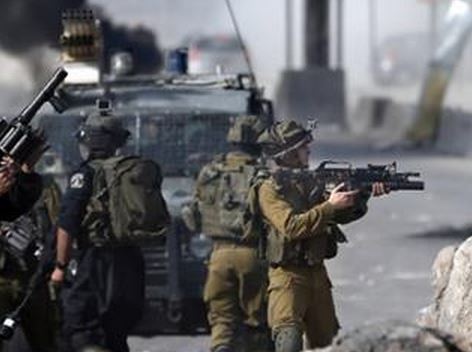 As hundreds of Palestinian women peacefully marched near the Qalandia Terminal north of occupied Jerusalem, Israeli soldiers violently attacked them, and wounded nine.The protesters marched towards the soldiers, close to the terminal, before the army started firing gas bombs and concussion grenades.

Following the attack, a number of local youths hurled stones and empty bottles on the soldiers who fired rubber-coated metal bullets, in addition to gas bombs and concussion grenades.

Zakarna was held for several hours at the al-Jalama roadblock, and was repeatedly beaten by the soldiers, before they released him.

The army said the arrests were focused in Borqa and Birzeit, near Ramallah, in addition to Doura and the ath-Thaheriyya, south of Hebron, and that one of the kidnapped is a Hamas member; all were taken to an unknown destination.

Many Injured By Army Fire Near Ramallah, Some Seriously
http://www.imemc.org/article/70838