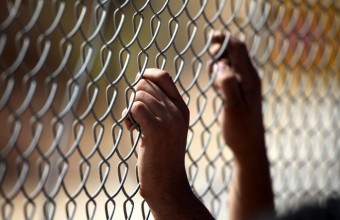 A preliminary agreement has been reached between representatives of Palestinian prisoners and Israeli prison authorities, stopping protests which detainees should have started yesterday and that would have culminated in a mass hunger strike, next month. Palestinians have been protesting against mistreatment in prisons of the Israeli state, isolation, administrative detention (without trial or sentencing) and the difficult living conditions, according to Palestinian correspondence (PNN/Nena).

For this reason they planned some actions of ‘civil disobedience’ against their jailers. ‘They will start to not work, to not attend the calls and slowly they’ll begin a hunger strike,’ said Qaraqe.

These measures, currently still in the preliminary agreement, could be taken if the agreement signed should not be implemented. In addition to the mass hunger strike scheduled for April 17, Palestinians were also thought to burn their sheets if the Israeli prison authorities had not accepted their demands for better health care and an end to isolation as a punitive measure.

Increasing the already perpetually tense climate, inside Israeli jails, were the events which took place at Ramon prison just prior to the current situation.

Addameer, a Palestinian NGO that deals with human rights, has reconstructed what happened last month. According to the Ramallah-based organization, tensions between prisoners and jailers increased when four members of Islamic Jihad were put in isolation. Israel’s decision pushed other members of Jihad not to eat, the following day, and to not respond to calls.

The retaliation of the Israeli prison authorities was immediate: prohibition of using television, imposition of fines and greater use of isolation. The situation in Ramon has worsened, says the NGO, when a prisoner in Gaza, Abu Hamzah Suwaan, after attacking a guard, was beaten by prison guards and taken to hospital for treatment. In addition, as a punitive measure, the Israeli authorities decided to transfer the four members of the Jihad to a criminal prison, putting them in solitary confinement for three weeks.

According to Addameer, by last December, some 6,200 Palestinian political prisoners were detained in Israeli detention centers. The number includes 465 administrative detainees, 23 women and 156 children. Hunger strikes are a tactic used by Palestinian prisoners to put pressure on prison authorities in an attempt to get more rights. In recent years, collective action of this kind has seen broad participation and represented a big headache for Israel because of the extremely poor health of prisoners, after so many days without eating.

In an attempt to end the fight of Palestinian prisoners last year, Tel Aviv has thought about a bill which allowed the force-feeding of prisoners. Despite the favorable opinion of the ministerial legislative committee, the text failed to pass three readings in the Knesset.

On June, 70 Palestinian prisoners on hunger strike were transferred to the hospital because of their health conditions. Israel Prison Service (IPS) justified the transfer alleging that it was only a measure to monitor their medical conditions and was therefore decided against, in cases of serious deterioration of health.

‘When someone is on a hunger strike for a long time, even starting to eat again can have an impact on one’s health,’ said Sivan Weizman then to al-Jazeera. ‘We are responsible for their lives. If their condition worsens because of their choices, then we must be prepared to deal with whatever happens.’