Israeli Forces Raid Yet Another Family’s Home in Tel Rumeida 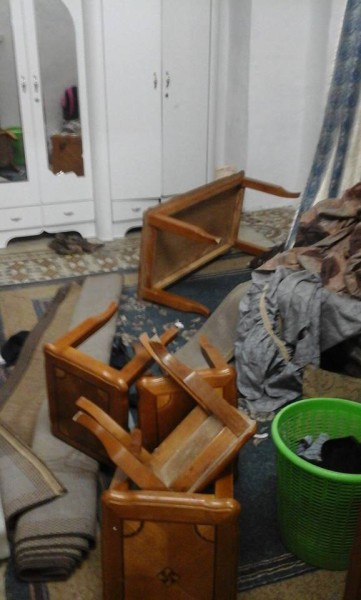 Two days ago, on the 10th of March, at around 1 AM in occupied Al-Khalil (Hebron), Israeli occupation forces raided the home of human rights activist Imad Abu Shamsiya and his family.The soldiers turned the house upside-down; the family watched as soldiers broke one of their cameras and stole the SD card and a hard drive. Imad Abu Shamsiya is a well known member of the Human Rights Defenders and his family has been frequently targeted by the Israeli army and settlers.

At least 25 soldiers came to the house. 10 of them went inside and woke up the 7 family members, including children and teenagers between the ages of 11 and 17. The soldiers told the family to gather all in one room, taking photos of everyone and documenting their IDs. After breaking a cupboard, searching through the computer and ransacking the house, they left after approximately 2 hours.

All family members have been attacked by settlers and either detained or arrested during the last 5 months. Yesterday, the day before the raid one of Imad’s sons, Awne, age 15, was detained for 3 hours because he refused to give up the name of one of his friends who the soldiers where looking for.

The raid on the Abu Shamsiya family is only one of the most recent in a series of home invasions Israeli forces have been conducting in Al-Khalil. The following night at 1:00 AM, soldiers raided the Abu Sneneh family’s home in Qeitun neighborhood. Around forty soldiers broke into the house in the night, forcing open every door and ransacking all the rooms, destroying some of the family’s belongings and remaining inside for three hours.