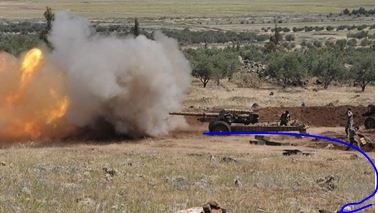 According to reports by the Almayadeen News Agency and the Al-Akhbar News Agency, an Israeli officer was shot and killed, a few days ago, “during a meeting between Israeli officers and officials of the Free Syrian Army” in al-Quneitra city, southwest of Syria.The reports allege the officer was among a number of Israeli commanders who met with leaders of the “Free Syrian Army” a few days ago, including Abu Osama an-Na’imi, who was also killed in the incident.

They said the officer; referred to as “Johnny,” was killed when Syrian soldiers targeted a site belonging to the Free Syrian Army in the al-Fitian town, in the Quneitra suburb.

According to the Almayadeen report, the Israeli commander, in addition to Abu Osama and, a Jordanian officer, were planning to attack Daraa and al-Quneitra to obstruct the Syrian army after it managed to advance into the area for the first time since mid-February.

In addition, the Al-Akhbar News Agency in Lebanon said it is likely that the Israeli commander was in charge of communications in a unit of the Givati Israeli Brigade, and was allegedly “involved in training armed fighters in Syria on advanced communication systems.”

Al-Akbar quoted unnamed senior sources stating that the location where Israel said its officer “was injured by a live round” is relatively far from areas of clashes; therefore, “it is possible Israel is preparing to declare the death of its soldier without defining a clear geographical location.