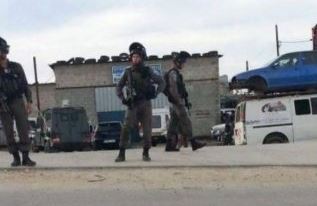 Israeli soldiers kidnapped, on Friday, three Palestinians in Bethlehem and Hebron, in the occupied West bank, broke into and searched several homes and stores, while many residents suffered the effects of tear gas inhalation.Mohammad ‘Awad, spokesperson of the Popular Committee Against the Wall and Settlements in Beit Ummar town, north of Hebron, said the soldiers invaded Safa area, violently searched the home of Kassab Abu Dayya, and kidnapped his son Saif, 18 years of age.

Soldiers also installed a roadblock on the main entrance of the town, stopped and searched dozens of cars, and investigated the ID cards of the passengers.

In Bethlehem, soldiers invaded Husan town, west of the city, broke into and searched several homes and stores.

Mohammad Shousha, member of the Husan Local Council, said a large military force invaded the town just as the Palestinians were leaving the local mosque following Friday noon prayers, and stormed a number of stores before searching them and checking their surveillance tapes.

In addition, soldiers kidnapped two Palestinians, and wounded several others, in Kisan village, east of Bethlehem, during a nonviolent protest in Palestinian lands Israel started bulldozing and uprooting, near the village’s northern entrance, to expand illegal nearby colonies.

The soldiers also kidnapped two Palestinians, including the Hasan Breijiyya, coordinator of the Popular Committee against the Wall and Settlements in the Bethlehem district.