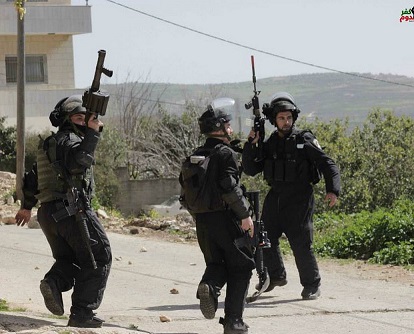 Israeli soldiers attacked, Friday, the weekly nonviolent protest against the Annexation Wall and Settlements in Kufur Qaddoum village, near the northern West Bank city of Qalqilia, shot and injured two by live rounds, while many suffered the effects of teargas inhalation.The Palestinians hold weekly protests in Kufur Qaddoum also demanding the military to open the main entrance of the village that the army sealed more than 14 years ago to allow uninterrupted traffic to Israeli settlers living in Qedumim colony, illegally built on privately owned Palestinian lands.

Eyewitnesses said the soldiers fired rounds of live ammunition, gas bombs and concussion grenades on the protesters as they approached the sealed entrance of their village.

Two Palestinians were shot and injured by live rounds, while dozens suffered the effects of teargas inhalation.

Soldiers also attacked the weekly nonviolent protest against the Wall and Settlements in the al-Ma’sara village, near Bethlehem, and fired gas bombs and concussion grenades.

The Popular Committee against the Wall and Settlements said the residents were also marking the seventh anniversary of the death of four Palestinians, killed by the army in the village.

The protesters carried Palestinian flags, posters of the four slain residents, and chanted slogans against the occupation, its ongoing violations, and its illegal settlement construction and expansion activities.

In addition, soldiers kidnapped two Palestinians, and wounded several others, in Kisan village, east of Bethlehem, during a nonviolent protest in Palestinian lands Israel started bulldozing and uprooting, near the village’s northern entrance, to expand illegal nearby colonies.

The soldiers also kidnapped two Palestinians, including the Hasan Breijiyya, coordinator of the Popular Committee against the Wall and Settlements in the Bethlehem district.
http://www.imemc.org/article/70887