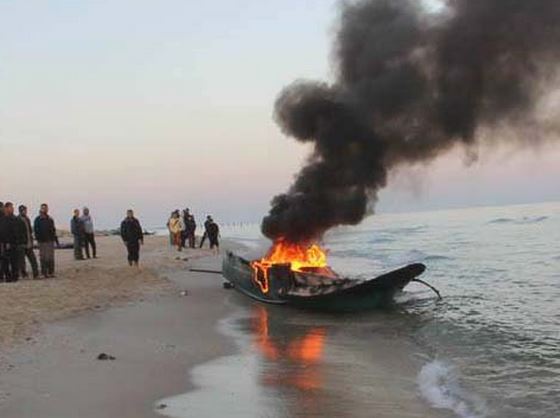 Israeli navy ships opened fire, on Saturday at dawn, on a number of Palestinian fishing boats in Palestinian waters, in the Sudaniyya Sea area, northwest of Gaza City.The fishers said they were less than four miles away from the Gaza shore, before the navy fired dozens of rounds of live ammunition, causing significant property damage but no injuries.

The navy conducts daily attacks against the fishers in Gaza, and their boats, in an attempt to prevent them from fishing, an issue that impacts the lives of dozens of thousands of Palestinians who depend on fishing as their only sources of livelihood to their families.

The attacks frequently lead to kidnapping some of the fishers, towing their boats, in addition to dozens of casualties, including fatalities.

Last Saturday, March 7, a Palestinian fisher was killed by Israeli Navy fire in Gaza territorial waters, and two others were kidnapped. http://www.imemc.org/article/70831

Two days before the attack, two fishers were shot and injured.

The current six-nautical-mile fishing zone falls drastically short of the twenty nautical miles allocated to Palestinian fishermen in the 1993 Oslo Accords, and come in direct violation of every ceasefire agreement.