Soldiers Attack A Child In The Al-Aqsa Mosque 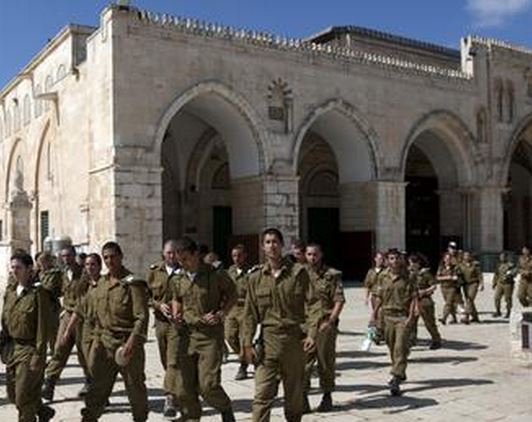 Israeli soldiers attacked, Monday, a 10-year-old Palestinian child as dozens of Israeli fanatics stormed the Al-Aqsa Mosque yards, in occupied Jerusalem, and also assaulted a mosque guard while trying to stop them. An employee with the Islamic Waqf and Endowment Department said the soldiers attacked the 10-year-old girl in the area between the al-Qibli Mosque and the al-Magharba Gate, as dozens of Israeli extremists stormed the mosque’s yards.

A local mosque guard tried to stop the soldiers and prevent them from further beating the child, but they also assaulted him before dozens of worshipers gathered around the soldiers while chanting Allahu Akbar (God is the greatest).

The Islamic Waqf Department denounced the latest attack, the daily Israeli invasions into the mosque quarters, and the continuous assaults against local worshipers.

On Sunday, a large group of Israeli fanatics stormed the mosque quarters from the al-Magharba Gate, under heavy Israeli police and army deployment.

The latest developments come amidst ongoing similar Israeli violations, and invasions into the mosque, especially by fanatic groups that are calling for demolishing it “in order to rebuild the temple.”

Israel imposes numerous restrictions on the entry of Muslims into the Al-Aqsa mosque, such as imposing a minimum age for entry, withholding ID cards, and continuously besieging it in addition to closing all of it gates while extremist Israeli groups stormed the compound.

The restrictions, and age limitations, differ between males and females, in addition to marital status and whether the person is a parent or not.