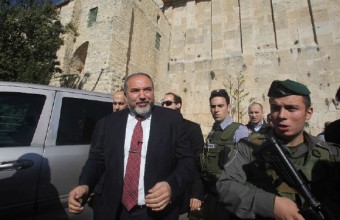 Israeli right-wing politician and Foreign Minister Avigdor Lieberman, Sunday afternoon, broke into Hebron’s Al Ibrahimi mosque. His provocative ‘visit’ came to claim that the mosque had a Jewish identity, and counts as an election campaign for the Knesset elections coming in two days.According to the PNN, Israeli forces around the mosque have tightened the security, closed a number of gates and blocked the citizens from entering, for fear of clashes.

Lieberman earlier stated that a speech to be given in Tel Aviv, today, should assure ‘destroying Hamas’ instead of setting any prisoners free.

Hebron governor Kamel Hamid condemned the visit, calling it part of a ‘growing call for desecration of holy places and the creation of chaos,’ Ma’an News Agency reported.

He also accused Lieberman — the second Israeli leader to visit the flashpoint Palestinian city this week — of ‘sabotaging the stability that the Palestinian National Authority has created in the city.’