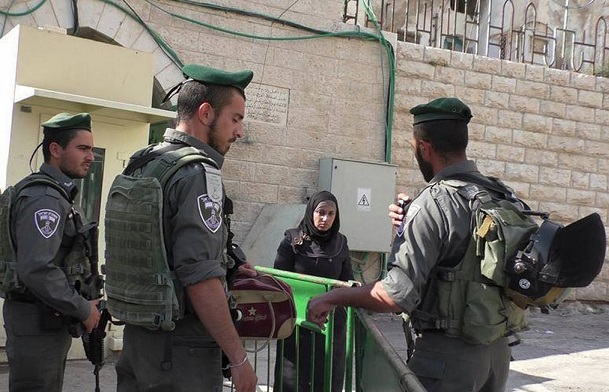 Israeli soldiers kidnapped, on Sunday evening, a Palestinian woman near the Ibrahimi Mosque, in the southern West Bank city of Hebron, allegedly for “carrying a knife.” Soldiers also kidnapped a young man from Beit Ummar.The army claimed the soldiers stopped a Palestinian woman, who remained unidentified, close to the Ibrahimi mosque, and allegedly “found a knife concealed in her bag.”

The woman never attempted to attack the soldiers, and was cuffed and blindfolded before being moved to an unknown destination, eyewitnesses said.

Also on Sunday, soldiers kidnapped a young Palestinian man in the Etzion military base after he headed there, responding to an interrogation order he received earlier.

Mohammad Awad, spokesperson of the Popular Committee against the Wall and Settlements, told the Palestinian News & Info Agency (WAFA) that the kidnapped Palestinians has been identified as Mohammad Ibrahim Abu Ayyash, 20 years of age.

In addition, soldiers detained two Palestinian women and a French peace activist near the Ibrahimi Mosque, and held them for approximately two hours, before releasing them.