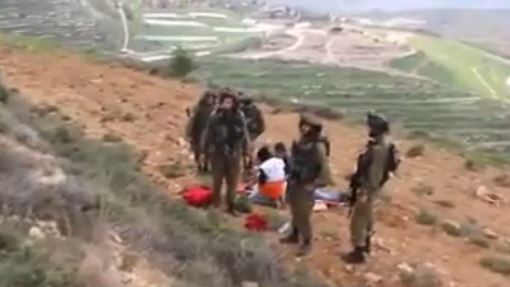 Israeli soldiers attacked, Sunday, a nonviolent activity held by dozens of Palestinians, and international peace activists, and dragged a Palestinian away after they assaulted him, causing him to faint.The Israeli military assault took place in Qaryout village, near the northern West Bank city of Nablus.

Dozens of nonviolent Palestinian activists, accompanied by Israeli and international supporters, were conducting a nonviolently activity in Palestinian lands, marking the twelfth anniversary of the murder of American peace activist Rachel Corrie.

A video documenting the incident, showed the soldiers preventing residents and medics from helping the fainted man, and later dragged him away without providing first aid.

“You cannot take him without a medic; it’s illegal… you can’t, am filming this,” a woman holding a video camera said.

Many soldiers then approached the woman, and started shouting, “Go away… Go away… Go back, Go back…”

The soldiers started dragging the man amidst shouts of objection from the locals and international peace activists, before a soldier fired a live round up into the air, and starting ordering the residents away.

Sounds of guns being cocked could be heard then, while the soldiers continued to drag the Palestinian, and continued to force the residents away, while threatening to shoot them.

On March 16, 2003, Corrie, a 23-year-old American peace activist from Olympia – Washington, was crushed to death by an armored Israeli military D9 bulldozer, in Rafah, in the southern part of the Gaza Strip.

She was a dedicated defender of peace, justice and equality for all, and a member of the International Solidarity Movement (ISM); Corrie was using a megaphone trying, along with many locals and peace activists, trying to prevent the soldiers from bulldozing and demolishing Palestinian homes in Rafah.

‘From the Diary of Rachel Corrie’ (w/video)
http://stopisraeliapartheid.blogspot.com/2014/03/from-d….html