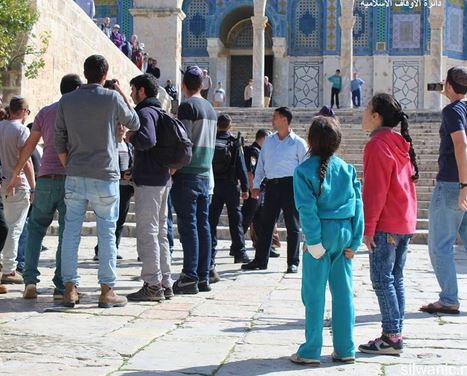 The Israeli Police released, on Sunday evening, three Palestinian children, and one woman, from occupied Jerusalem, after issuing an order denying them access to the Al-Aqsa Mosque, for 15 days, and forced them to sign a 5000 NIS bail agreement each.The Police kidnapped the three children, and the woman, earlier on Sunday, near one of the Gates of the Al-Aqsa Mosque, and took them to Beit Eliyahu Police Station in the City.

On Sunday morning, the police attacked a child, identified as Hadeel Rajabi, 10 years of age, as dozens of soldiers, officers and Israeli fanatics stormed the Mosque yards.
The officers kicked and pushed the child, and when local mosque guards intervene, the soldiers attacked them too.

The incident took place after more than 82 Israeli extremists, and scores of soldiers, invaded the mosque to conduct what they called “a tour in its yards.”

Such attacks are taking place on a daily basis, as several fanatic groups in Israel are calling for the destruction of the mosque “to rebuild the temple.”