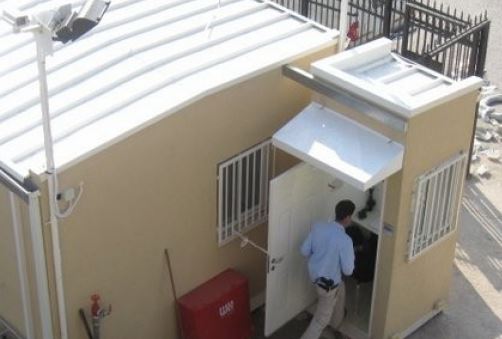 Israeli soldiers installed on Monday evening, a mobile home on bulldozed Palestinian lands, near the main entrance of Kisan village, east of Bethlehem, in the area where Israeli is bulldozing the lands to build a settlement “industrial zone.”Head of the Kisan village council, Hussein Ghazal, said the mobile home was installed on the lands that were bulldozed two days ago, where Israeli intends to build a factory.

Ghazal added that the many bulldozers and workers are operating in the area, while wood, iron and construction supplies have been bright to the scene.

The official further stated that Israel intends to “conduct more theft of Palestinian lands, and eventually surround the village from all directions.”

It is worth mentioning that the Applied Research Institute in Jerusalem (ARIJ) recently reported that Israel is trying to illegally annex lands belonging to Kisan village, in order to make them part of the so-called “Greater Jerusalem” settlement project.

ARIJ conducted a geopolitical research on the issue, also examining the Israeli plans, maps, and the lands the army is bulldozing, and found out that the Israeli plan aims at expanding the Gush Etzion settlement block to reach all the way to the Dead Sea shores, as part of the “Greater Jerusalem” plan.