Soldiers Detain A Palestinian Near Jenin 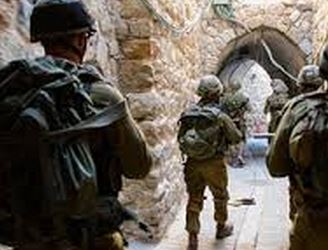 Israeli soldiers detained, earlier on Tuesday morning, a Palestinian in the northern West Bank city of Jenin, installed a roadblock near the city, as the army conducted several hours of training, and detained a Palestinian. Army invades different areas in Hebron.Media sources in Jenin, said the soldiers conducted several hours of training in the location of the former Sanour military base, and detained a Palestinian identified as Sufian Mohammad al-Athra.

The sources added that the soldiers invaded Jenin city, and the area surrounding “Haddad Tourist Village.”

In addition, soldiers installed a roadblock on the main entrance of Ya’bad town, near Jenin, and searched dozens of cars while inspecting the ID cards of the passengers.

Also on Tuesday, soldiers invaded various neighborhoods in Hebron city, in the southern part of the occupied West Bank, and installed roadblocks on the main entrances of Sa’ir and Halhoul towns, before searching dozens of cars, and inspecting the ID cards of the passengers.