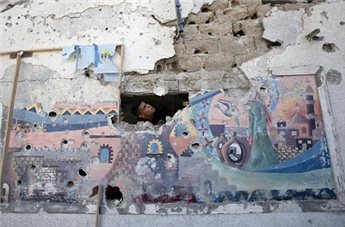 The United Nations Palestine refugee agency UNRWA, on Sunday, inaugurated the first school associated with the organization to be built in the Gaza Strip since Israel’s summer assault laid waste to hundreds of educational institutions.The Khuzaa Preparatory School was inaugurated Sunday, according to Ma’an, and is the first of several schools the agency plans to build across the tiny coastal enclave, which saw homes, schools, and places of worship targeted repeatedly by Israeli bombs during the July-August offensive.

UNRWA commissioner-general Pierre Krähenbühl was present at the inauguration on Sunday, where he delivered a short speech urging the international community and donor organizations to fulfill their pledges to help rebuild Gaza.

The school is located in the town of Khuzaa, east of Khan Younis and near the Israeli border, an area severely damaged by Israel during the assault.

More than half of all homes in the town of around 10,000 were flattened by Israel. Many in the area still live in temporary housing as they wait for Israel to allow more reconstruction material into Gaza, which has been under an Israeli blockade for the last eight years.

The school in Khuzaa is one of the first to go up to hopefully replace the more than 200 schools that sustained extensive damage due to Israeli bombing.

More than two dozen schools were completely demolished by Israeli attacks, while at least 232 were damaged.

During the war, hundreds of thousands of displaced Gazans sheltered in UN-run schools.

As a result of Israeli attacks on the schools, scores of Palestinians were killed. UN officials complained that the killings occurred despite the fact that they had given the exact coordinates of the schools to Israeli authorities.