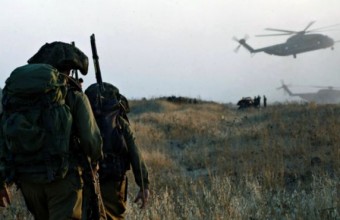 Israeli occupation forces, Sunday morning, launched military drills in the areas surrounding Gaza, without any previous warning.The drill contains active movement of military machines and warplanes, according to the PNN, in addition to bombardment noises that lasted until late night hours.

According to Hebrew media, Major General of the Southern area, Sami Turjman, ordered to have this training in order to test the readiness of the forces in cases of emergency.

He claimed that the training comes under the casual military plan, and does not have any relation to any upcoming events.

Back in August, Israeli authorities evicted 1,300 Palestinians from their homes in the south Hebron hills, in the West Bank, claiming they reside in an army military training firing zone.

In October, Israeli forces stormed into Aida refugee camp without any provocation and began shooting tear gas, sound bombs and rubber coated steel bullets at children in the streets.

Eyewitness back then said that soldiers were training by using families, children and homes as military practice.

Tamer Abu Salem, 13 years old, was in Lajee Center moments before he was shot in the head with a rubber coated steel bullet. Tamer underwent emergency surgery after arriving at the hospital and he is still in the ICU. Before the soldiers left the camp, they shot two bullets through Lajee Center’s windows as punishment.

In October as well, Israeli Occupation authorities distributed eviction threats to 19 Palestinian families in the area of the Northern Jordan valleys, in order to use the area for military purposes.