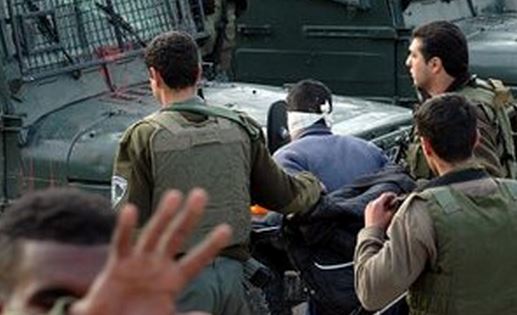 Israeli soldiers kidnapped, on Tuesday at dawn, one Palestinian in the West Bank district of Bethlehem, another on a military roadblock near the northern West Bank city of Jenin, and a third Palestinian in Ramallah.Several military vehicles invaded Artas village, south of Bethlehem, and kidnapped a former political prisoner, identified as Jom’a Nahedh al-Juju, 32 years of age, after searching and ransacking him home.

His family said the army previously kidnapped al-Juju, and imprisoned him for several years, before he was released just a month ago.

In addition, soldiers kidnapped Noureddin Hamza Kamil, 19 years of age, from Qabatia town, south of Jenin, while trying to cross the Za’tara military roadblock, south of the northern West Bank city of Nablus.

The soldiers also invaded the al-‘Arqa village, west of Jenin, stormed and searched several homes, and interrogated the families.

Local sources said the resident suffers a disability in one of his legs, and that the soldiers pointed their guns to his father’s head while searching and ransacking his property.

Israeli soldiers conduct daily invasion and arrests in different parts of the occupied West Bank. Such attacks include destruction to property in addition to repeated bulldozing and uprooting of farmlands.