Army To Demolish Two Homes, A Well, Near Hebron 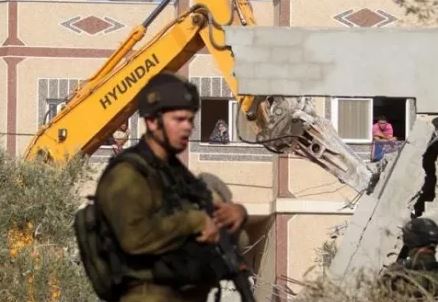 Israeli soldiers invaded, on Tuesday morning, the al-Koum Palestinian village, southwest of the southern West Bank city of Hebron, and handed orders for the destruction of two Palestinian homes, and a well. The soldiers handed ‘Arafat Ahmad Rajoub, and his brother, Yasser, two orders to demolish their own homes in the village, and handed resident Mohammad Abdul-Hafith Rajoub an order to demolish his well.

Soldiers also invaded a number of neighborhoods in Hebron city, installed roadblocks on the main entrances of Sa’ir and Halhoul towns, and Hebron’s northern entrance, before stopping and searching dozens of cars, and investigated the ID cards of the passengers while interrogating them.

In addition, a number of Israeli fanatics of the Ramat Yeshai illegal colony, built on Palestinian lands in the center of Hebron, invaded the Jabal ar-Rahma area in the city, and conducted provocative acts.