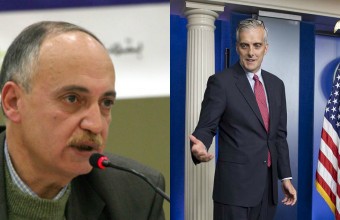 PLO central committee member, Wassel Abu Yousef, in an exclusive talk with the Palestinian News Network said that recent statements coming from the White House were ‘late,’ and that these words should be joined with actions to end the Israeli occupation of Palestinian land, in order to actually give the Palestinian people their right to self-determination.White House Chief of Staff, Denis McDonough, said on Monday that the crisis in US-Israeli relations over the issue of a Palestinian state has not dissipated, despite Netanyahu’s statements during his election campaign, in which he said he will not allow the establishment of a Palestinian state.

Related: Obama Administration on Israeli Election: ‘Enough With the UN Cover Up’

Abu Yousef assured that McDonough’s statements should be proven on the ground and in practice, through bilateral steps to end the illegal Israeli occupation and empower the Palestinian people, after all the crimes committed against it.

McDonough, in his statements to J Street in Washington, said that the US ‘cannot simply pretend that those comments were never made.’ He also warned the new Neatanyahu regime not to consider unilateral annexation of any occupied West Bank territory, saying that it would ‘be both wrong and illegal,’ and that America would strenuously object.

‘Israel cannot maintain military control of another people indefinitely. An occupation that has lasted for almost 50 years must end.’

‘After the election, the prime minister said that he had not changed his position, but for many in Israel and in the international community, such contradictory comments call into question his commitment to a two-state solution, as did his suggestion that the construction of settlements has a strategic purpose of dividing Palestinian communities and his claim that conditions in the larger Middle East must be more stable before a Palestinian state can be established,’ he said. ‘We cannot simply pretend that those comments were never made, or that they don’t raise questions about the prime minister’s commitment to achieving peace through direct negotiations.’

McDonough called on the two state solution, and demanded to ‘never stop working’ for it. He also warned against any unilateral annexation of lands in the West Bank, saying it ‘would be both wrong and illegal,’ that America would never support it, ‘and it’s unlikely Israel’s other friends would either. It would only contribute to Israel’s isolation.’