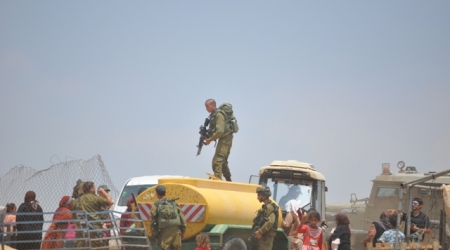 Israeli occupation forces, on Tuesday morning, stormed Wadi al-Neim village and confiscated several vehicles.According to Al Ray Palestinian Media Agency, activist Jalal Zyadnah said that dozens of Israeli police deployed into the village, in addition to other areas of the Negev, and confiscated a number of tractors.

Israeli police claimed that these vehicles were used without a license and were identified in previous confrontations with the Israeli soldiers.

Local witnesses reported that Israeli special forces assaulted Palestinian citizens while taking their tractors, noting that they also arrested six Palestinians as they tried to confront the Israeli forces.

No further details were given.