Report: ‘Palestinian Students Forced to Use Sewer to Reach School’ 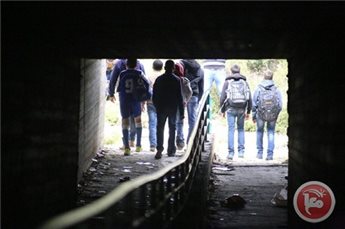 Palestinian students are being forced to cross sewage channels in order to reach a high school in the western Ramallah district, after a settlement road cut off the only other means of access, according to witnesses.Up to 200 students from the villages of al-Tira and Beit ‘Ur al-Fuqa now reach the school using a four kilometer route that runs along the separation wall, where armed settlers and Israeli soldiers, regularly interrupt their commute.

The route passes through sewage channels and regularly takes students up to 40 minutes to reach their school, as the channels are filled with rainwater in the winter and snakes in the summer.

Students told Ma’an News Agency that Israeli soldiers also regularly fire tear-gas canisters at them on their way back.

The al-Tira Beit ‘Ur al-Fuqa high school is now enveloped by the Israeli apartheid wall on three sides, at a point where the wall extends more than five kilometers inside the 1949 Armistice Line.

The wall separates the villages from the illegal Israeli settlement of Beit Horon, as well as an Israeli military training camp. On the school’s fourth side, a road was opened exclusively for settlers going from Jerusalem to Tel Aviv.

The school principle, Samer Bader, said that when the sewage channels are filled with wastewater in the winter it is particularly difficult for children to reach the school and sometimes they are not able to make the passage at all.

Bader also said that security conditions surrounding the school had prevented the administration from developing and maintaining the school properly, meaning that in the winter the students study in classrooms covered in mold.

The school has been repeatedly raided by Israeli soldiers during the school year, Bader said, and he believes that Israeli forces are purposefully obstructing any attempts to develop or improve the school by launching raids whenever such attempts are made.

One student, Mumen Faraj, said he now has to leave his home at 6:45 am in order to reach his school by 8:00 am. He said the difficulties faced en route make it difficult for his classmates to focus during class.

Another student, Ayman Abd al-Fattah, said that he and his classmates have been repeatedly harassed by Israeli settlers on their way to school.

He added that the students are always frightened whenever they see Israeli soldiers while walking to school.

The Beit Horon settlement was created in 1977, and in 2006, the separation wall was built to separate the settlement from the school.

Israel began building the separation wall in 2002, and the route has been the target of regular demonstrations by border towns whose land is cut off by its path.

Israel has regularly confiscated large plots of Palestinian land in order to build the wall, and when the 435-mile barrier is complete, 85 percent of it will have been built inside the occupied West Bank.

In 2004 the International Court of Justice ruled that the separation wall was illegal and ‘tantamount to annexation.’