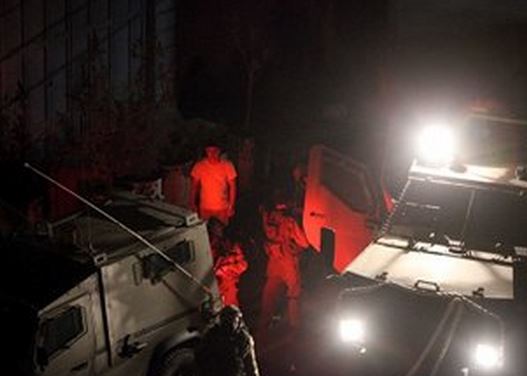 Israeli soldiers kidnapped, on Wednesday at dawn, four Palestinians in different parts of the occupied West Bank, stormed and searched dozens of homes, and detained many residents on roadblocks, while two were kidnapped late on Tuesday at night.Eyewitnesses said the army detained a Palestinian from the al-Hroub family, after stopping him on a sudden roadblock between Deir Samet and Beit ‘Awwa towns, southwest of the southern West bank city of Hebron, and kidnapped him before taking him to an unknown destination.

The army installed a roadblock on the main Hebron-Jerusalem road, searched cars and interrogated the residents.

Media sources in Ramallah said the several military vehicles invaded Birzeit, north of the city, and kidnapped a Palestinian, identified as Ibrahim Ismael Sa’id, 18 years of age, and took him to an unknown destination.

The sources said several military vehicles, accompanied by an armored bulldozer, invaded the town, before dozens of soldiers were deployed in different neighborhoods, patrolling them on foot.

The soldiers also stormed students’ dorms, and searched them, in addition to searching several nearby homes. The army invaded Jifna village, and conducted training while military choppers hovered overhead.

Many homes were searched and ransacked in Deir Abu Mash’al village, west of Ramallah, after the soldiers invaded it, and also stopped and searched several cars while interrogating the passengers and investigating their ID cards.

Late on Tuesday at night, soldiers installed a sudden roadblock on the Jenin-Nablus road, near ‘Arraba town, and kidnapped two Palestinians from Jenin.

Eyewitnesses said the soldiers kidnapped ‘Ala ‘Omar Zakarna, 20, from Qabatia town near Jenin, and ‘Adel Ghassan ‘Arqawi, 21, from Jenin city. The soldiers left the area after kidnapping the two Palestinians.